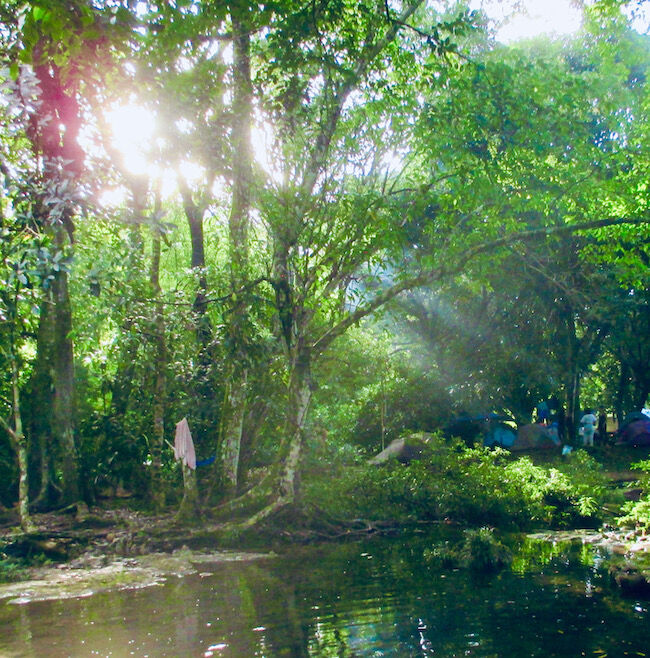 Palenque, Chiapas Mexico. Upstream, across from the kitchen. I like the sun's rays. Photo by author

During the month of December, the World Rainbow Gathering, an international event, had its camp out at a site near the ruins of Palenque in Chiapas, Mexico. I attended for the two weeks prior to Christmas. Nine years ago, the same site was used for the celebration of the Mayan calendar transition in 2012. 800 people attended the current event.

A Brief History of Rainbow Gatherings

Some of you may never have heard of Rainbow Gatherings, or not know what they are. I'll try to tell you very briefly here.

The grandfather of the Gatherings was the Woodstock Festival of Music and Peace, in August of 1969. From my personal experience, attending this event was life-changing. Half a million people shared and cared for each other and respected nature. We all trusted each other. After the big storm, some lost their tents, but this was not a problem. Your nearby brother or sister would let you stay in theirs.

In 1972, a small group decided to reinstate these values, camping out in nature but without the electricity. They and their networks traveled all over the US posting notices on bulletin boards, like at food coops. 20,000 people converged in a national forest near Steamboat Springs in Colorado to celebrate peace and love in the cathedral of nature.

The experience caught on, and during the week of the 4th of July, every year since then, an anarchistic group stages a Gathering in a different state. This developed in other countries all around the world, and eventually an annual World Gathering happened.

The 50th anniversary of US Gatherings will be, once again, in Colorado this July 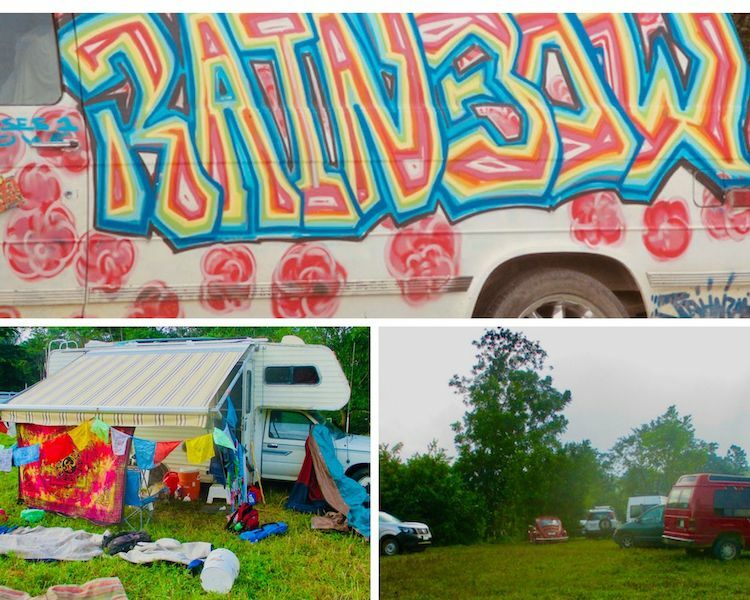 Palenque, Chiapas Mexico. The parking lot at the Gathering. Photo by author

Gatherings have rules, decided upon by passing a power object around the circle at a council meeting. Whoever holds the object speaks and others listen without interrupting. The object keeps moving until everyone says what they need to about the topic, and then it is decided. A few rules that have come over time are no alcohol or hard drugs, no electronics, and no money exchanges. People barter goods and services, and contributions for food and etc., are made to the Magic Hat, which is passed around after every meal at the Main Circle.

In the Parking Area (shown above), some of these rules are lifted. Note that I was a renegade, performing an illegal activity, by taking photos and doing video interviews. I had to take care.

This particular Gathering was unusual in that the decision to use this site came so late that there was no Seed Camp. Setting up infrastructure came as people arrived.  When I got there, it had been in progress for only one week so that you'll notice, for example, the rudiments of the kitchen I camped near, Coffee and Chai, and see tents spaced out a bit.

I shot videos, interviewing a couple of interesting guys. The first is of Tai, who built rocket stoves with on site materials. He is a Mexican who knows a lot a about permaculture, and teaches the martial arts, tai chi and qigong.

The second, featuring Ben Joseph, shows his deep love of earth spirituality, and his manifestations of ceremonies around the world.

When I arrived, I picked what turned out to be a good camping location. It was midway between the Kids' Kitchen and Coffee/Chai Kitchen. I spent most of my time hanging out at the latter. Often I was too lazy to walk up to the Main Circle for the two meals served each day, or did not want to face the crowd, and stayed at our kitchen.

There were a lot of people coming and going with plentiful conversations. I got to play a drum next to one of the best hand-drummers I had ever heard. Chess games were abundant.

I knew a man at the Israeli camp who I'd met at Tepoztlán. He travels the world leading singing circles. I asked him if he'd lead a circle for the Friday night Shabbat. Just by word of mouth we attracted a huge crowd and it was a delightful ceremony.

Workshops I attended were tai chi and tantra. I was reluctant to go to the men's circle because I'd had enough of this over the years, but then, as an experienced elder, decided it was my duty, and I attended. After a while, it started getting dark. I was cold and tired. I left. Later that night, the leader of the circle found me at the coffee kitchen. He told me that the men wanted me to do a question and answer session the following day, so I did, and found the questions challenging.

It felt good to be of service.

In general, it felt to me like young people who had never been to a Gathering before predominated at this one. They were naive, but very eager to learn. It was good to be honored as a wise elder in this way.

Speaking of elders, we were fortunate to have a Hopi Elder visit our circle and speak of the Hopi's Rainbow Prophecy. Here's a photo of our group. The elder is front and center, with white hair and beard, wearing a blue tee shirt.

Palenque, Chiapas Mexico. A Hopi Elder speaks to us. Photo by author

I hope you got the flavor of this event that I enjoyed and understand why I did. There are many elements that I did not explain, but you could look them up if you want.

Here is a concluding video: