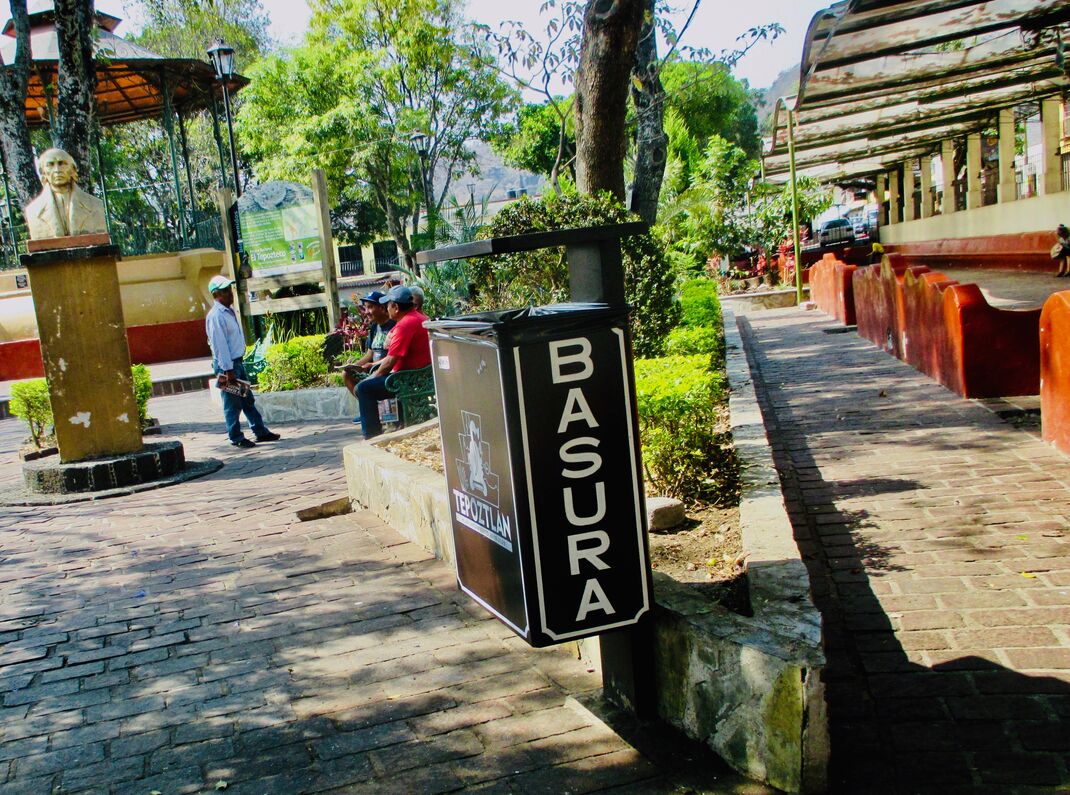 Tepoztlan,Morelos, Mexico. New trash (basura) containers are all over Centro. This is the main plaza (zocalo). Photo by Don Karp

In order to continue the federal funding normally paid to a " magic city" in Mexico, Tepoztlan needs to meet a certain level of cleanliness. After all, tourists don't want to come to visit where there is a mess. Mexicans are slowly learning about how to deal better with solid waste. Good habits are now taught at school. Plastic bags are everywhere, but there is some impetus to reuse them, or use less of them.

A few years ago, I was the only passenger on the public mini-van on my route. The driver and I had a conversation about Tepoztlan. I told him how much I loved walking the trails in the mountains. I added that I did not like seeing trash there. He looked at me quizzically, as if to say--are you crazy? Trash belongs out of sight, like in the woods.

Let's take a look at how solid waste is dealt with here.

Solid waste in my apartment

In my opinion, good solid waste management begins with point source reduction. Most of the food I buy is fresh fruit and vegetables. I use very little prepared food. Because of this, I have very little to recycle. I divide my solid waste into different containers to aide in collection and distribution. 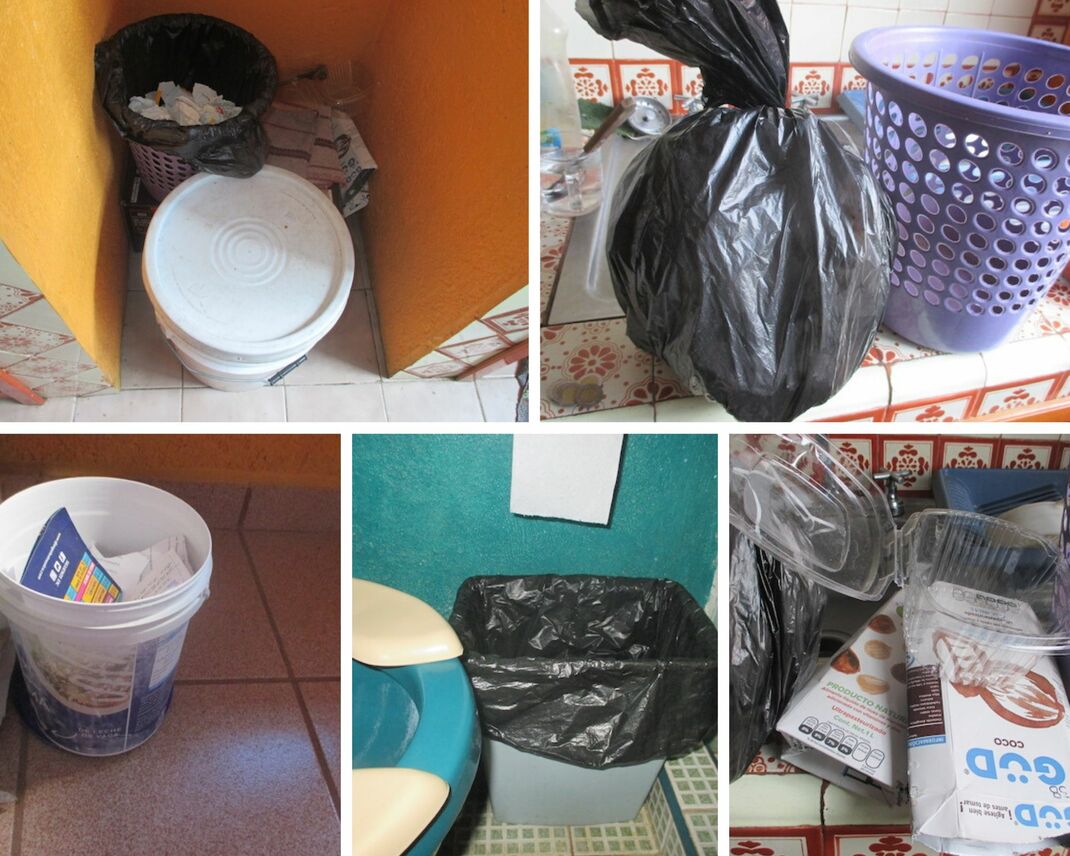 In most parts of Mexico, its very dry, and septic fields are weak. Toilet paper is not flushed down the toilet. It is disposed of separately. We do have recycling here. I'll discuss compost later.

Every Tuesday afternoon, a truck comes around our neighborhood to collect trash. After that truck, another one comes to collect recycle. We put out our bags of trash tied up high on the fence so that dogs can't get at them. And we leave some coins for the collectors--five pesos per bag, or USD $0.25. The recycle collectors make money by selling some of the things they collect. 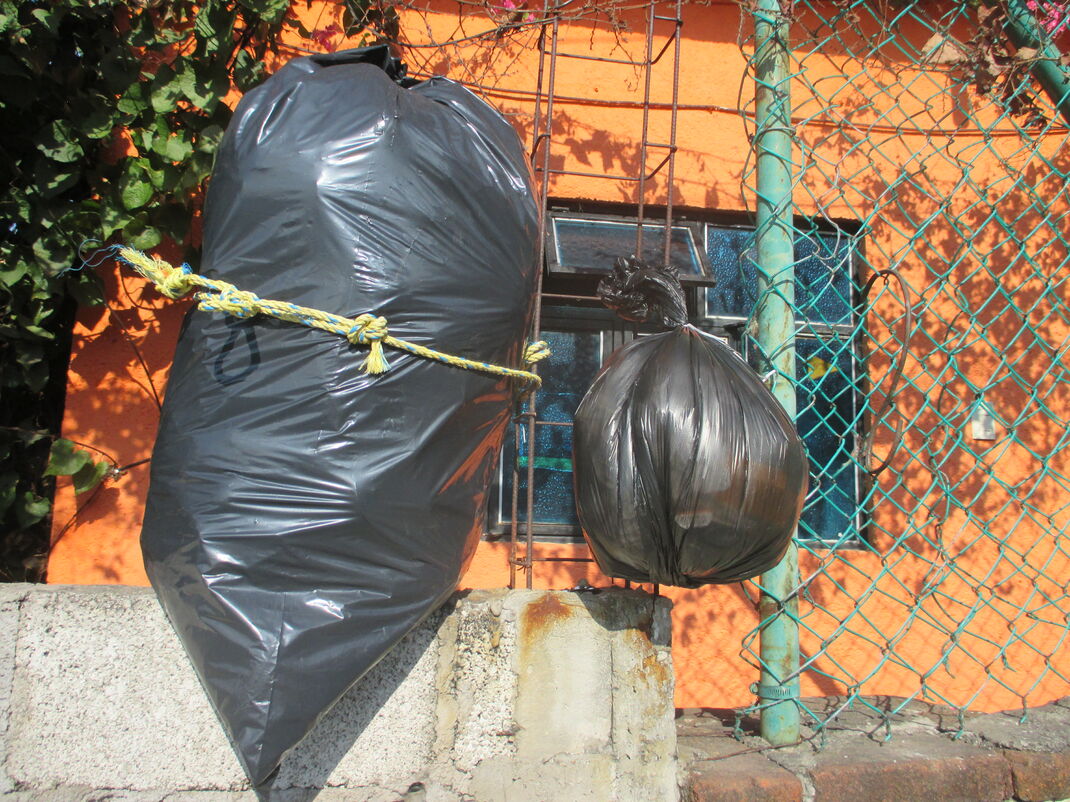 Tepoztlan, Morelos, Mexico. Bags awaiting collection. Notice the coins at the bottom and to the left of the smaller bag. These are for the trash collectors. Photo by Don Karp

Before tourism became the biggest industry in Tepoztlan, agriculture predominated. Families grew much of their own food, with a little left over to sell in the market.

The custom of burning agricultural waste and brush is left over from ancient times. In these days, burning is illegal, but it's done anyways, and no one stops it. One example is after sugar cane harvest. This time of year, and the end of the dry season, we often have forest fires. Some of this comes from escaped debris from the burning after the sugar cane harvest. Camping has been outlawed. A severe fire started recently as an accident of a fire juggler.

There is no easy way to get water into the mountains to quench these fires. It's brought in by helicopter. It's not uncommon for firefighters to meet their deaths fighting these fires.

The truck to pick up neighborhood plant and tree trimmings comes around every other week. Truck loads are transported to a rustic residential area a couple of miles from Centro. 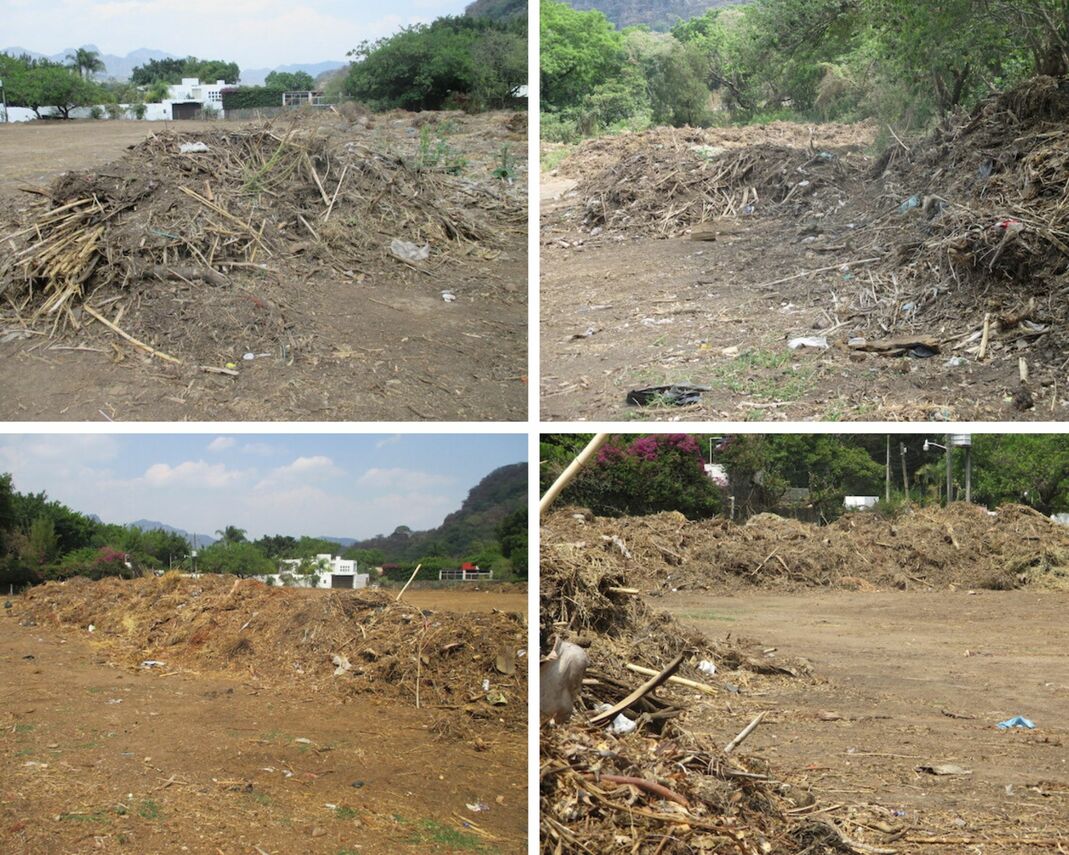 The above photos show what happens to agricultural waste (compost) after it is collected. The trash and recycle material that's picked up is brought to deposit areas. The landfill is on the outskirts of town. The recycling place is not far from the center of town. When I went there to take photos, they told me it was not allowed. I am guessing I'd get a similar response if I went to the landfill.

A five minute walk up the steep hill from my apartment is a small park with lovely views and some rides for kids. This is off the beaten path for tourists. I'm not sure who uses this park, but it seems to always be loaded with trash. Glass and plastic bottles, bottle caps, cigarette butts, and the like. A couple of weeks ago I went there with two large plastic bags and spent an hour filling them. There was a section I didn't get to clean. The other day I went again and filled one bag. This park is a constant mess. 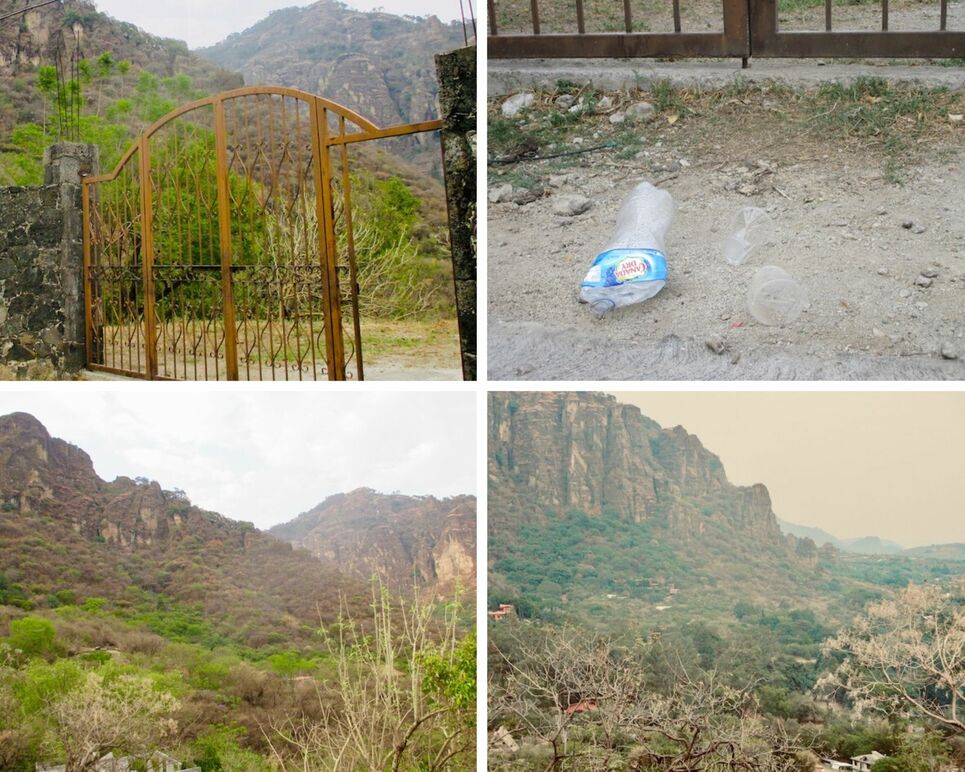 Tepoztlan. Morelos, Mexico. Beautiful views from my neighborhood's park. Notice in the top right photo the plastic bottle just outside the gate. Photos by Don Karp 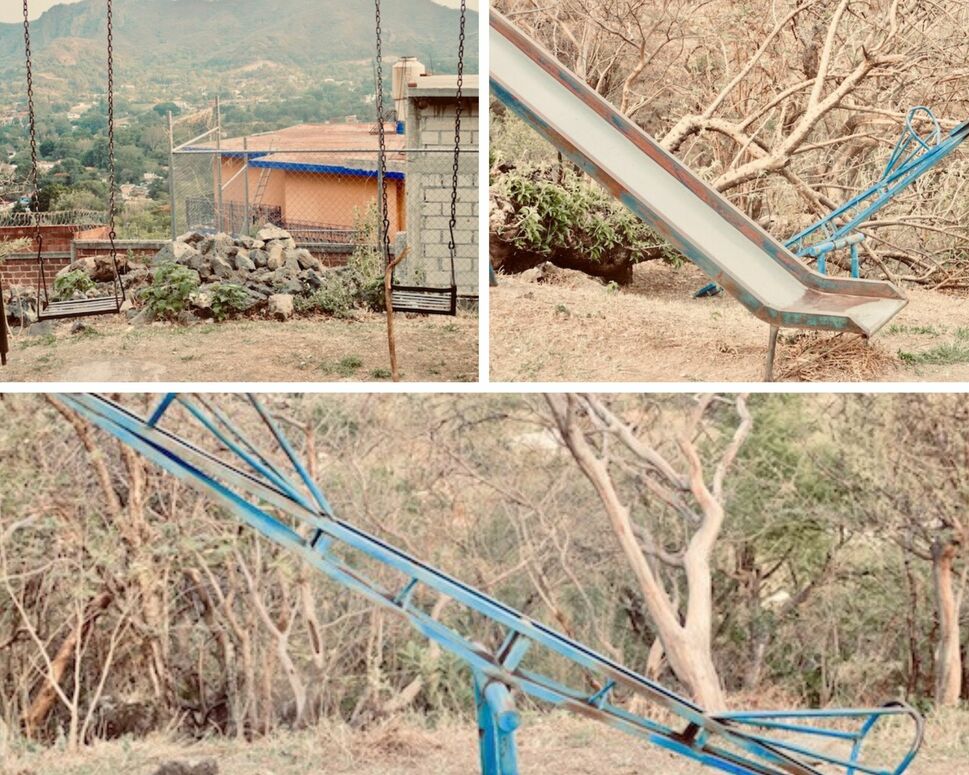 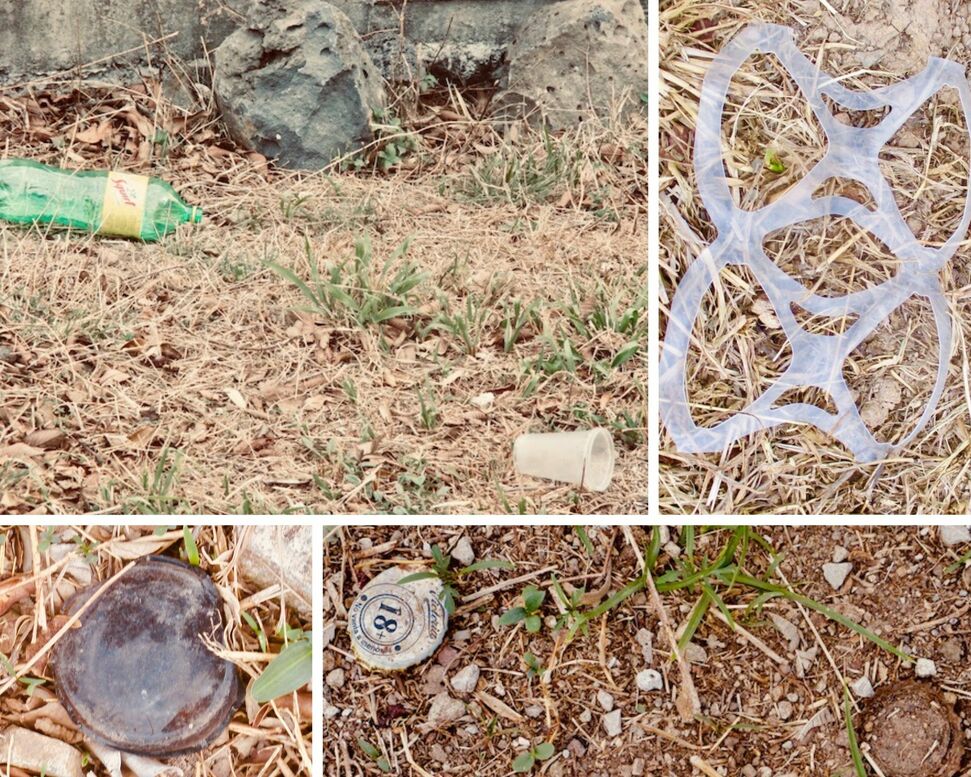 For those of you who've not read my article on Water In Mexico, you might want to check it out, as it is related to the solid waste disposal problem. If you'd like more information on sustainable methods, please go to SARAR's website. You can contact them here:

On our precious planet, we really need to do much better with our solid waste. Through education we can reform, and live to see another era.

For archives, click on the Letters button at the top right on this page.