A large portion of Mexico's economy comes from tourism. The predominant tourists are Mexicans, not from other countries. Tepoztlan is no exception. It's a popular day trip destination for people from Cuernavaca and Mexico City. Young people travel through with backpacks, on this part of "the gringo trail." Snowbirds make regular trips.

Tepoztlan, Mexico. Weekend tourists on one of the main streets, Av. Tepozteco. Photo by Don Karp

Tepoztlan, in the state of Morelos, is in central Mexico, in the "volcanic region." It has the designation, " Magic City." The federal government recognizes its tourist potential and provides funding.

Tepoztlan, Mexico. Axitla, a popular restaurant on the trail to the pyramid. Photos of the jungle terrace (top). Images of promotional murals (bottom). Photos Photos by Don Karp

Although this is the tourists' favorite trail, it's not my favorite. I prefer walking on the earth, as opposed to the cement, and without so many people. There are other trails with better views at the top and shorter walking times. The pyramid itself has little to offer compared to other similar sites all over Mexico. For more information comparing the pyramid trail with other trails, please look at this blog. This is about one of my favorite parks. Below are more photos of the beginning of the trail. 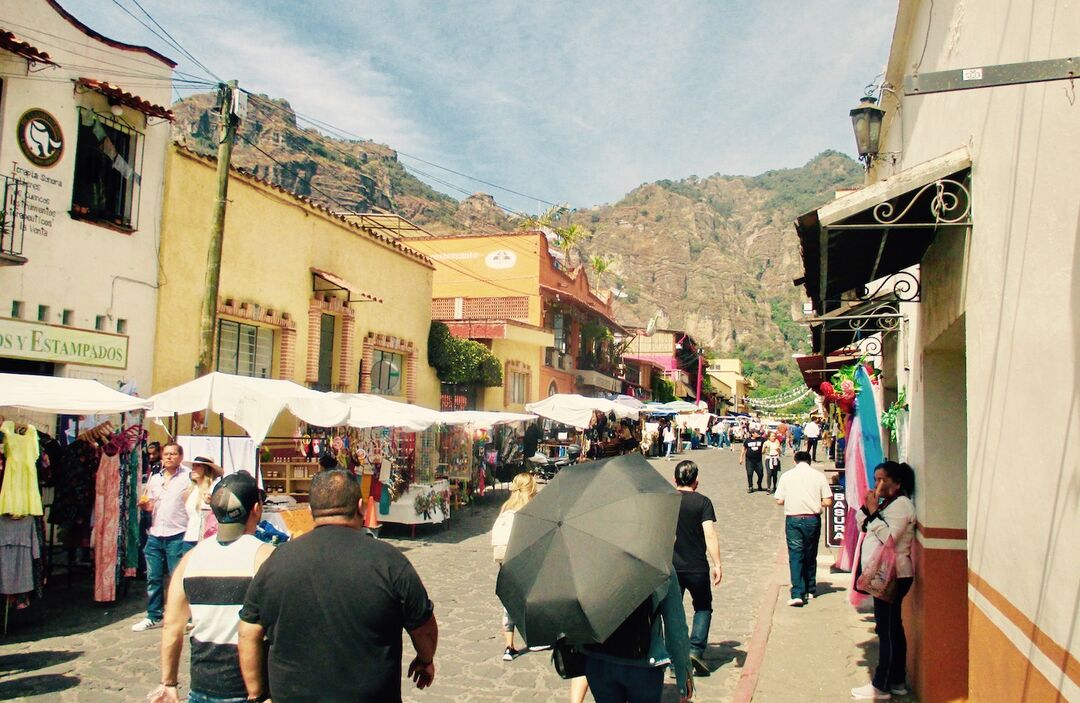 There are several attractions drawing tourists. One is the pyramid. The trail to it begins at the end of one of the main streets, Av. Tepozteco. Throughout this article, I show how the weekend population is much higher than during the week. Notice this in the photos of the pyramid below. 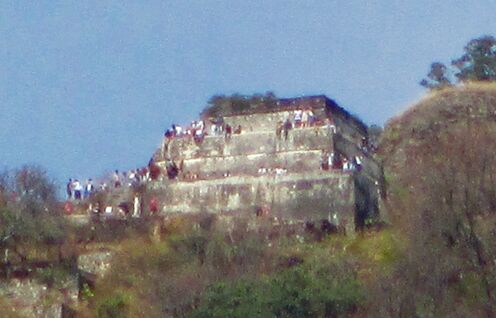 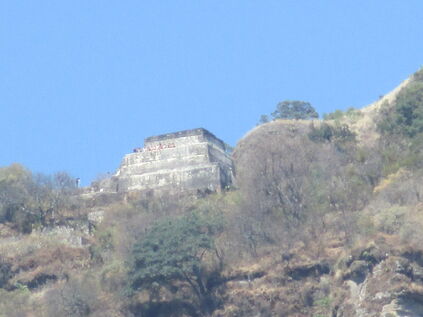 Walking the main street, Av. Tepozteco, that leads to the pyramid trail, one sees it's lined with booths selling food and alcohol. These are where tourists spend their money. A friend of mine who has a booth selling clothing told me that sales of crafts, and all else but food and alcohol, has gone down in the past few years.

One of the most popular restaurants in Tepoztlan is along this route. Its main feature for me is dining on the jungle terrace. I go there for special occasions. The photo below shows some of its promotional murals plus images of the terrace. 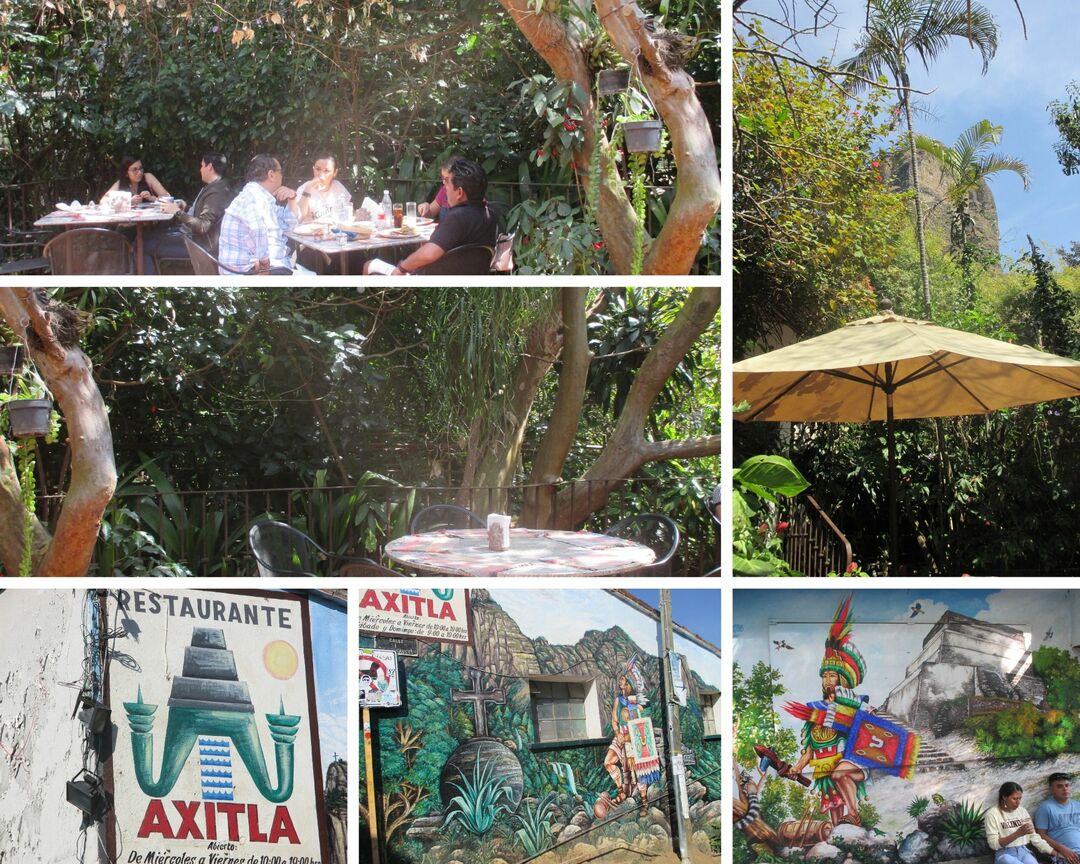 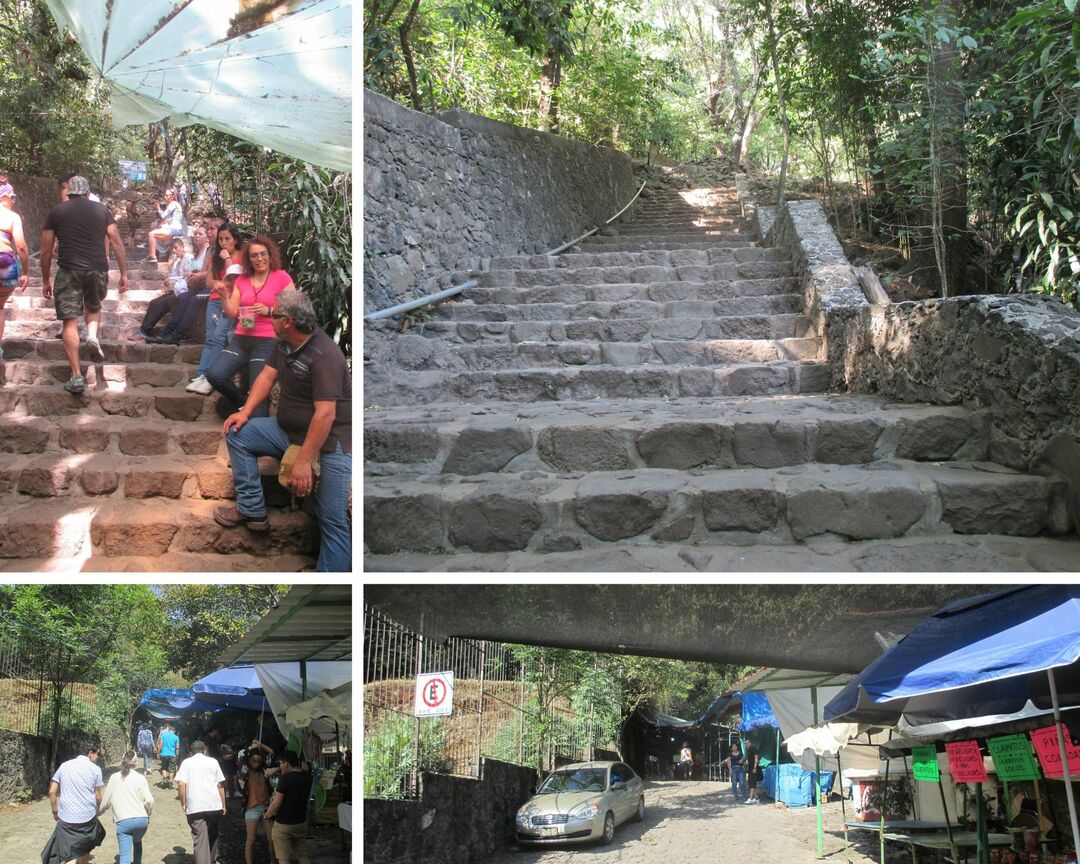 Cafes and other attractions

I've mentioned one popular restaurant. In the photo below, I feature two cafes and another restaurant. One of the most popular cafes, Buenos Tiempos, is also pictured here. 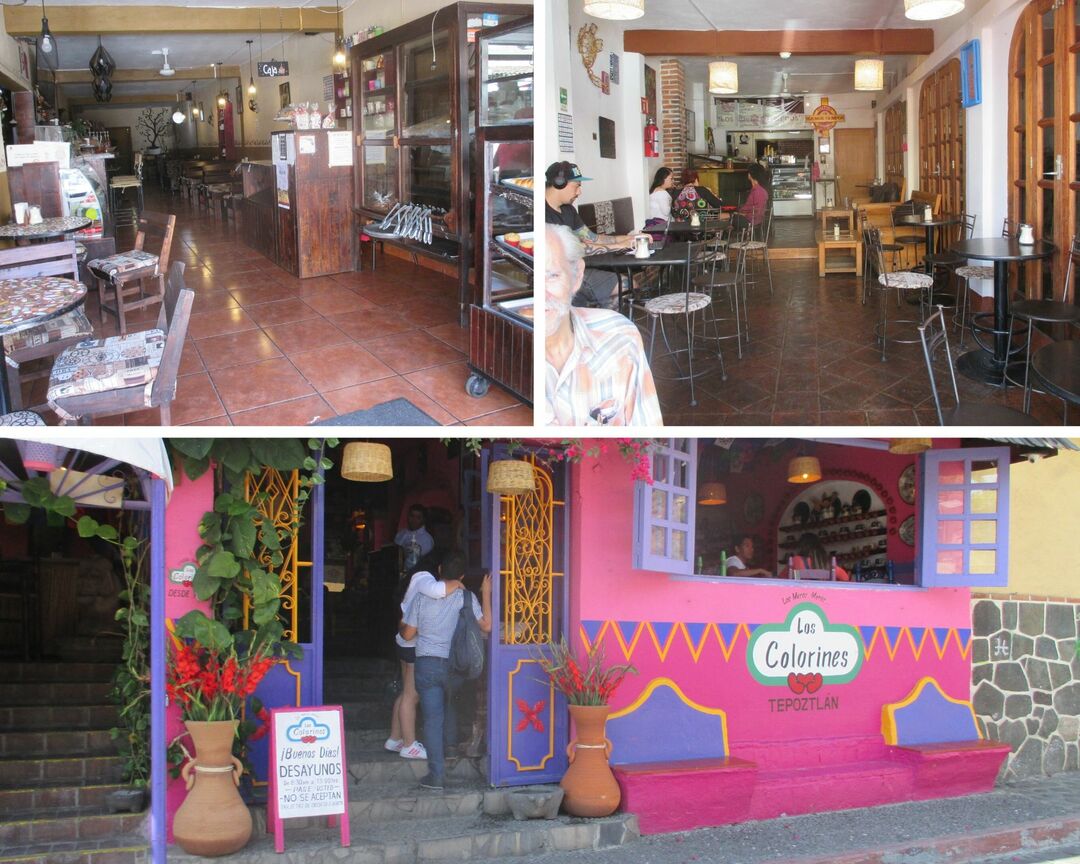 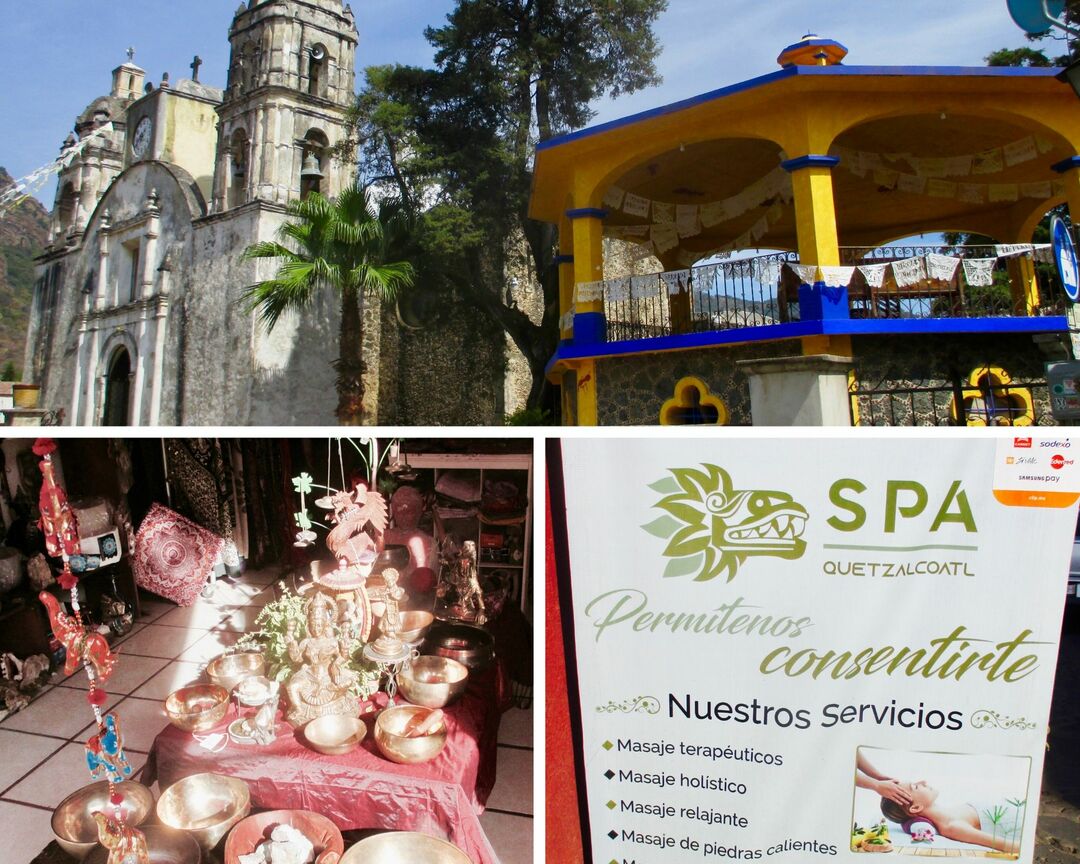 Tepoztlan, Mexico. A major church on the main street to the pyramid (top). Other tourist attractions (bottom). Photo by Don Karp

Some come for alternative healing. See this blog, and this one. For others, the many colorful murals are an attraction. Of course, as all over Mexico, there are many fiestas. Christmas is a big one, but the most populated is Carnival, which is happening as I write this. Outsiders come to Tepoztlan to have their family celebrations.

An important consideration is where to stay if you're here for more than a day trip. There are many places to chose from, depending on your budget and other considerations. Many of my friends rent rooms at Meson Amanda. It has a community kitchen, is in the Centro, and has very affordable prices. If you want something more luxurious, I'd suggest considering Casa de la Vida, a top-rated B&B, that also has cleansing retreat options. Here's a video slide show I made of Casa de la Vida.

Most of the problems in Tepoztlan come from an exponential growth in tourism with no town planning. To show this, I once again compare a weekend (Saturday), with a massive influx of tourists, to a weekday (Monday), in the video below.

Tepoztlan, Mexico. Filmed in a "magic city" of central Mexico, this video compares what it's like on the weekend with a weekday. Video by Don Karp

The majority of the resident population derives from ancient Toltecs. These people are called "Tepoztecos," as opposed to the rest of the residents, "Tepoztitsos." The Tepoztecos are a fierce force keeping corporate influences out of Tepoztlan. It is very refreshing to be in a town of this size (population 50,000) without Starbucks, MacDonalds, Walmart, and the like.

During 1996, there was a non-violent revolution, called "the Golf Wars." The attempt to install a golf course was thwarted. This resurfaced a year ago and was again defeated. More on this in a future blog. A couple of years ago, the state decided to widen the highway. Resistance to this was not as great, and the project is underway. Perhaps as time goes on the Tepoztecos are more influenced by economics.

One major problem with this huge weekend influx, is traffic. The streets were not built to accommodate motorized vehicles. The main streets fill with pedestrians. It would seem the obvious answer is to block these streets to all but emergency vehicles and public transportation. I've heard this doesn't happen because many families get income from parking in the center of town.

Another problem is solid waste. The town has installed small trash containers. They are often overflowing.

I've discussed the noise factor in t his blog.

If it is not more careful of trash and alcohol consumption in the streets, the town could lose its Magic City status.

With an influx of new Tepoztitsos (non-indigenous residents), rental prices have skyrocketed. Newcomers often do not bother to compare prices and are happy to pay rents as offered. Air B&B offers a living income to some, but it elevates rental prices considerably.

If you are interested in visiting Tepoztlan, you can check out my travel tips, a bonus free offer for subscribing to get upcoming blog notices. Please also check t he blog of James Horn, a resident of nearby Cuernavaca, to get more information on travel in Mexico.