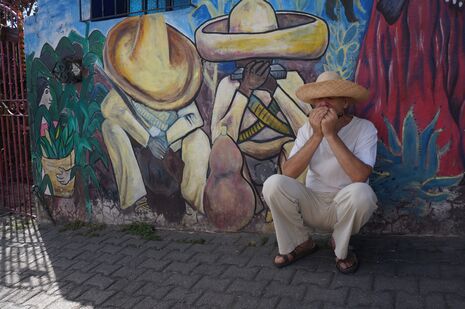 In Mexico, the holiday is celebrated differently than in the US or other parts of the world. This article is about Tepoztlan, the "pueblo magico" (magic city) in the central Mexican highlands, where I live. Other parts of Mexico have variations.

What I describe is from my own understanding and may not be entirely correct. 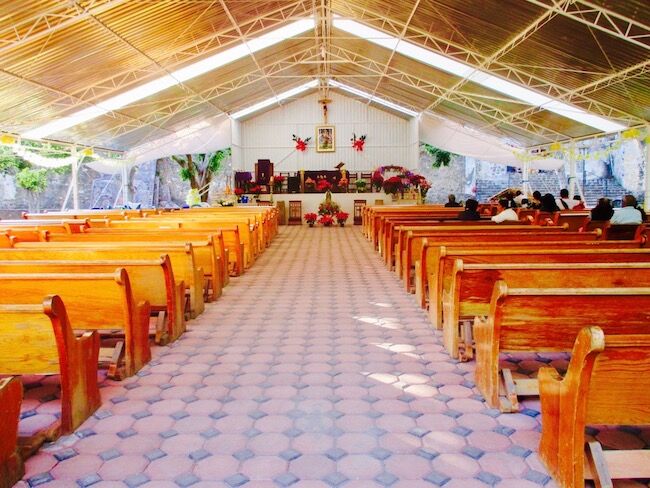 The Parroquia, a temporary structure while the central Tepoztlan church is under repair. Photo by Don Karp.

The Day of Guadeloupe

There are a cluster of holidays surrounding Christmas. The first is the Day of Guadeloupe, on Dec. 12.

Guadeloupe was an indigenous woman who a monk encountered long ago in a miracle appearance on a mountain. She is said to be the indigenous version of Mary, and maybe even related to a pre-christian deity.

The night before the 12th, families attend a church service. Devout pilgrims walk to the shrine in Mexico City.

For eight nights before Christmas, members of each Colonia or Barrio gather at their church for what’s called “posada.” My interpretation is that this represents Mary’s wandering prior to the birth, before she gave birth in the manger.

After the prayers inside the church, people gather outside while others distribute food and candy to them each night. There are, of course, sparklers and fireworks. The breaking of the piñata by children releases candy, and they all scramble for some.

Christmas Eve sees each Colonia assembling at their churches and parading to the central church in the Puebla of Tepoztlan, where they partake in Midnight Mass.

This year the church is under repairs and is closed. People gather in an outdoor temporary structure, called a Parroquia, on the church grounds.

There are church services on Christmas Day. The day is largely devoted to family gatherings with lots of food and drink. 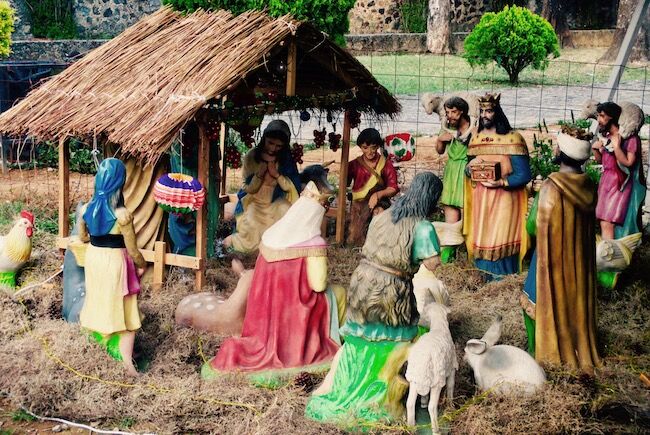 A manger scene at the central Parroquia in Tepoztlan. Photo by Don Karp.

On January 6, most of the Hispanic world and culture celebrates El Dia De Los Reyes, the Epiphany, remembering the day when the Three Wise Men following the star to Bethlehem, arrived bearing their treasured gifts of gold, frankincense, and myrrh for the Baby Jesus. In some ways, this day is more important than Christmas.

It’s a tradition for children to receive gifts this day, and they put out a shoe for the Wise Men to deliver sweets. This tradition predates Santa Claus and gift giving on Christmas, which started to gain popularity in Mexico when supermarkets and department stores came, in the 1940’s.

I have a Mexican friend whose child learned about Santa Claus from television. He wanted to send a letter, but his mom told him Santa is too far from Mexico to visit here and that he’d get gifts on Three Kings Day.

On that day, a special bread is served, called El Rossca de Los Reyes. It’s in the shape of a ring, and has three plastic baby dolls baked inside. If you get a doll in your piece, you are required to prepare the Candelaria feast.

For me, this is a very busy social time of the year, with parties and other events, some presenting time conflicts where I need to make a choice. I love the activity of togetherness, but, at the same time, am sometimes weary and overwhelmed by it all.

My hope is that each of you readers finds the deeper significance of this time of year as uplifting—a time of Love and Light.

I hope the New Year brings you all of your heart’s desires. 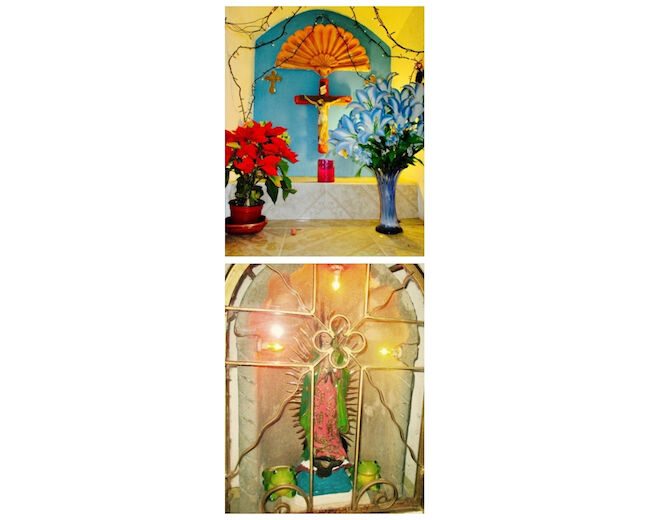 The video below features Christmas decorations in Tepoztlan. It begins in the central plaza (Zocalo) where sales of these predominates. The videos show electronic musical lights, and the photo triptych is a display of natural moss to use in making mangers. The main street has banners overhead. The ghastly looking church is how my camera captured this low light scene. At the end is an electronic simulation of dripping icicles.