A Trail in Amatlán 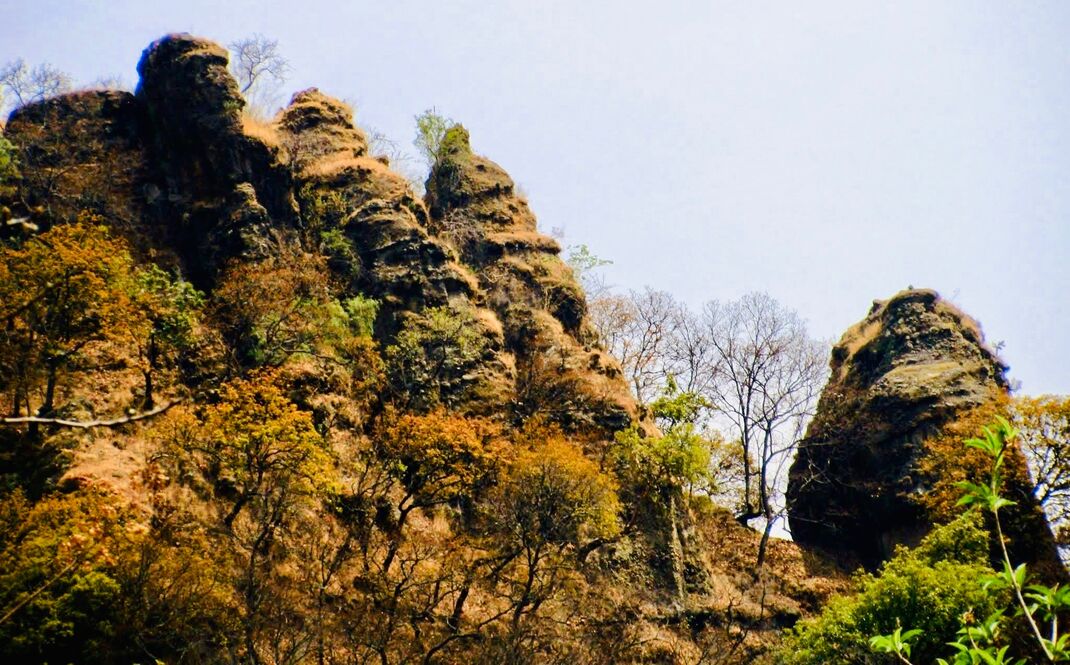 Amatlán is an ancient village in the municipality of Tepoztlán. It is the birthplace of the Nahuat god Quetzalcóatl. Its name derives from that of the Amate tree, from which a form of paper was made.

I am going to introduce you to one of the trails there.

First part of the trail

From Tepoztlán it's a twenty minute ride to Amatlán by public transportation. A few blocks from there is the beginning of the trail. This first part is fairly flat and leads to one of the village water sources, a pure spring with delivery by pipes. It is a half hour hike. 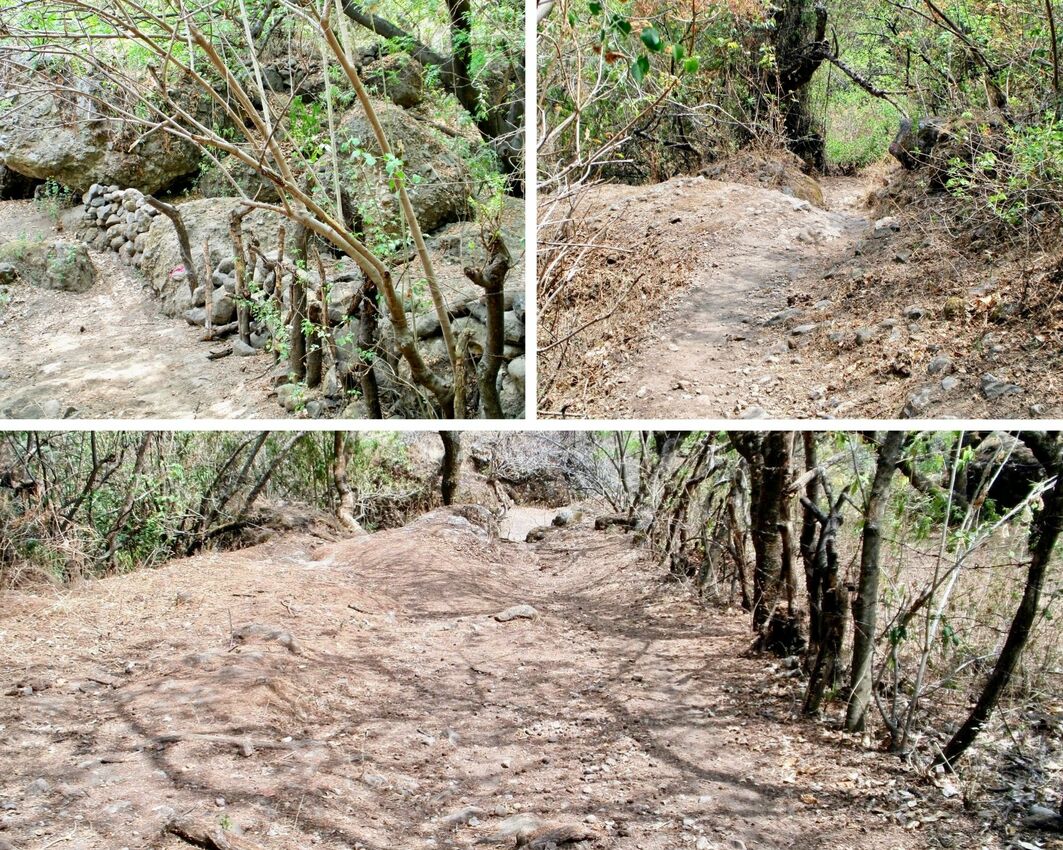 Amatlán, Morelos, Mexico. Three different parts of the beginning of the trail. 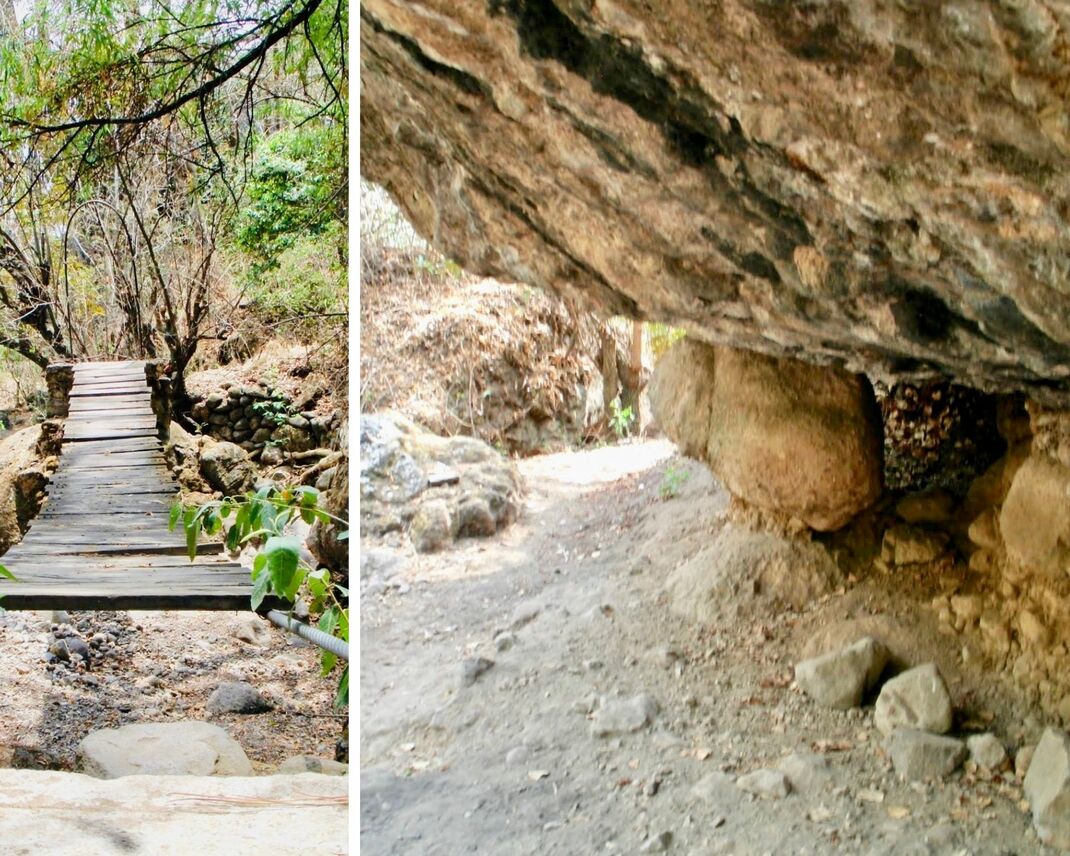 Earlier I mentioned how the town gets its name from the Amate tree. The growth of this tree is very unusual. Its roots seem to embed and wrap around boulders for support. 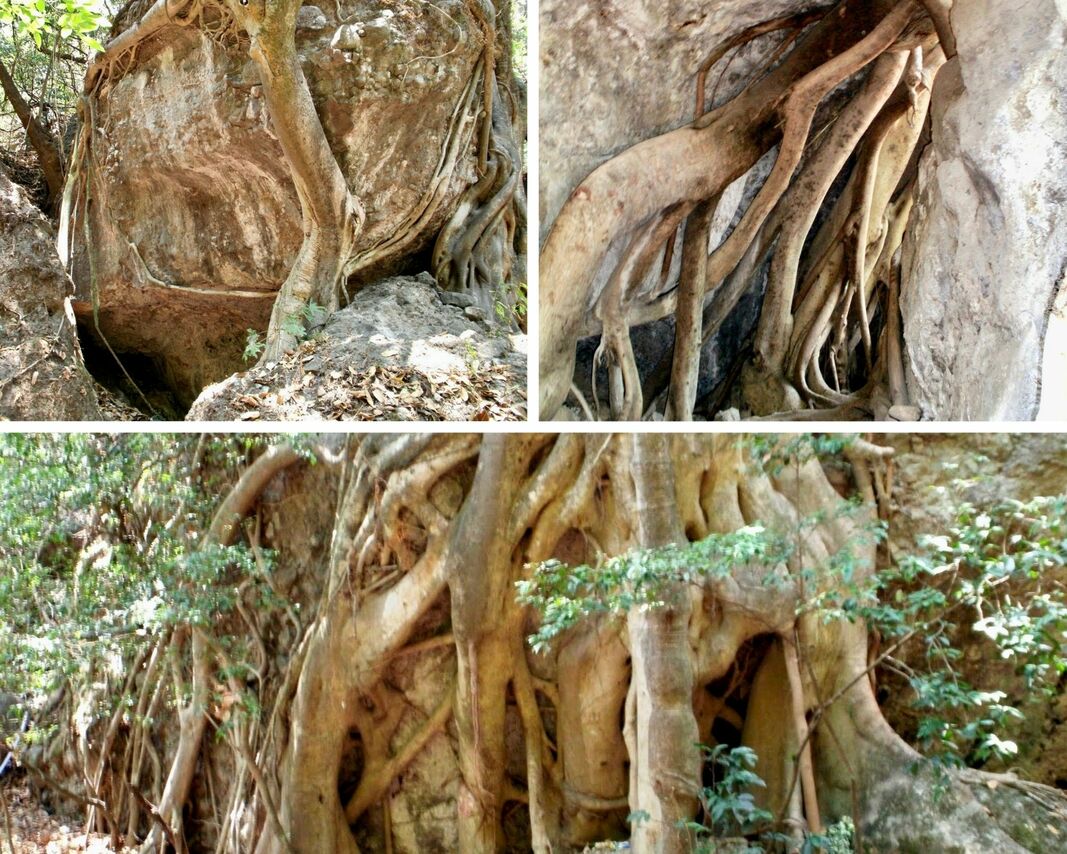 Amatlán, Morelos, Mexico. These photos show how the roots of the Amate magically wrap around and penetrate boulders.

Just before reaching the spring, one encounters two gigantic boulders merging at their top with a space to walk through. It's almost like nature built it that way for humans. Nearby is a rock outcrop that is cave-like. One can go inside.

In 2012, a friend was visiting from the US. We walked this trail. When we got to this sacred spot, a half hour in, we found cut flowers strewn over lower boulders and play money scattered about. My friend told me we should not go into the area as there had been a ceremony in that space and we would disturb the energy.

I pooh-poohed her idea and we went in. I left my pack in a central cleared area and we entered through the gigantic boulders. It was a distance away, but I had a view of my pack. When we returned from that area I found my pack was moved. A rock fell on it from above the cave, and a small glass jar containing supplements was shattered. I checked my wallet and the $100 peso note ($5USD) I had in there was gone. What happened? To me, this was a very mysterious supernatural experience. 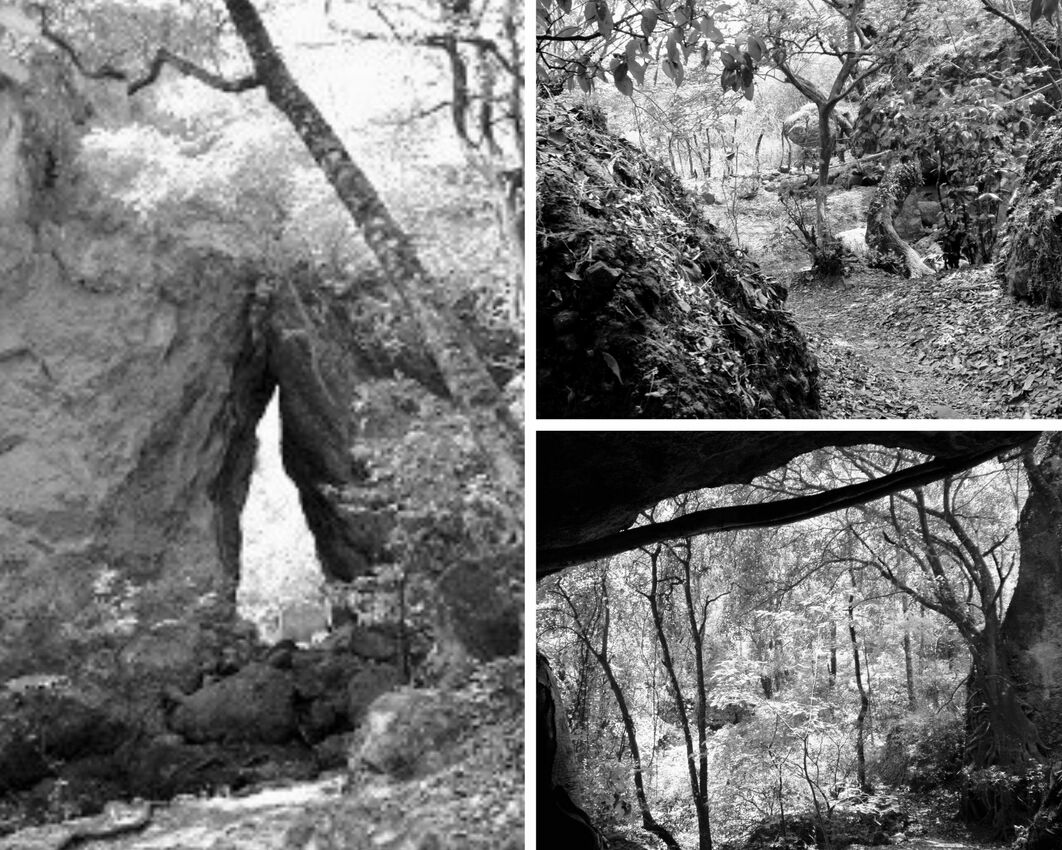 Amatlán, Morelos, Mexico. A sacred area near the water source. Left: Merging of two gigantic boulders leaving a bottom space to walk through. Bottom right: A photo taken from inside a cave. 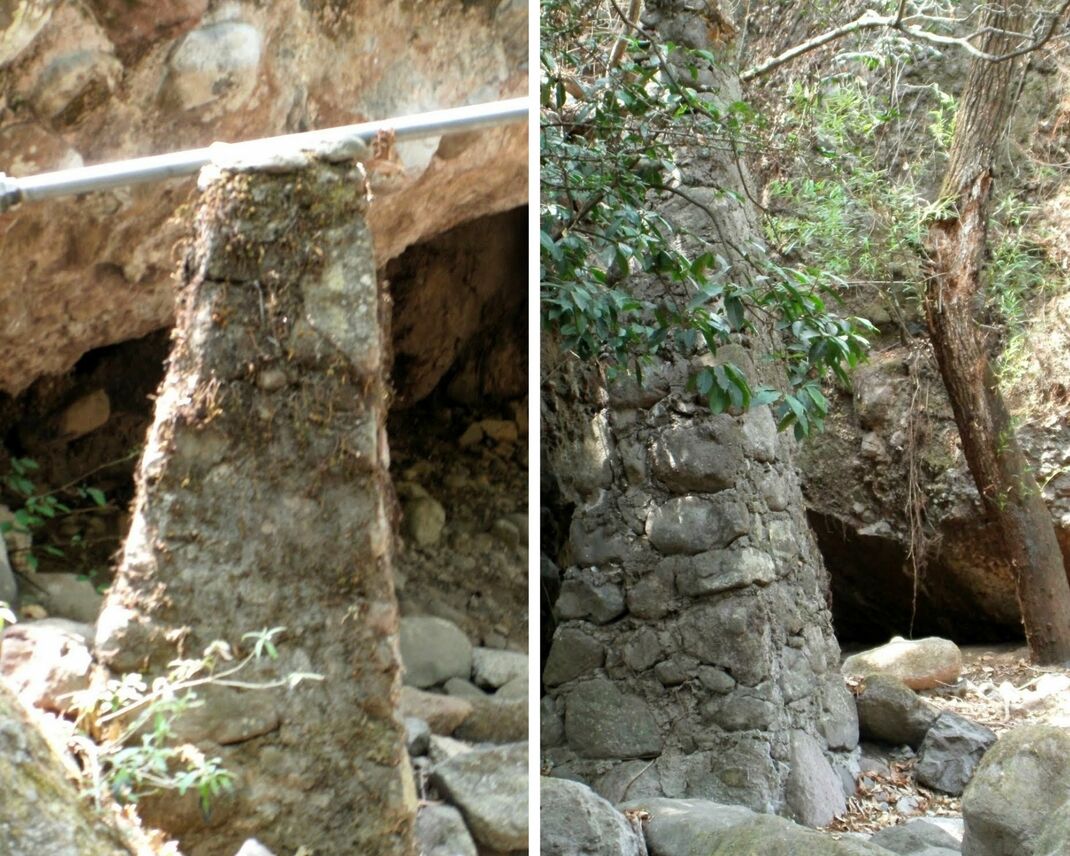 Second part of the trail

The first part of the trail, up to the water source, took half an hour and was mostly flat. This second part took another half hour, but was steep and moderately difficult.

It features incredible landscapes with unusually shaped volcanic formations typical of the central Mexico region. These were created by secondary lava flows and only a few areas of the world have them. 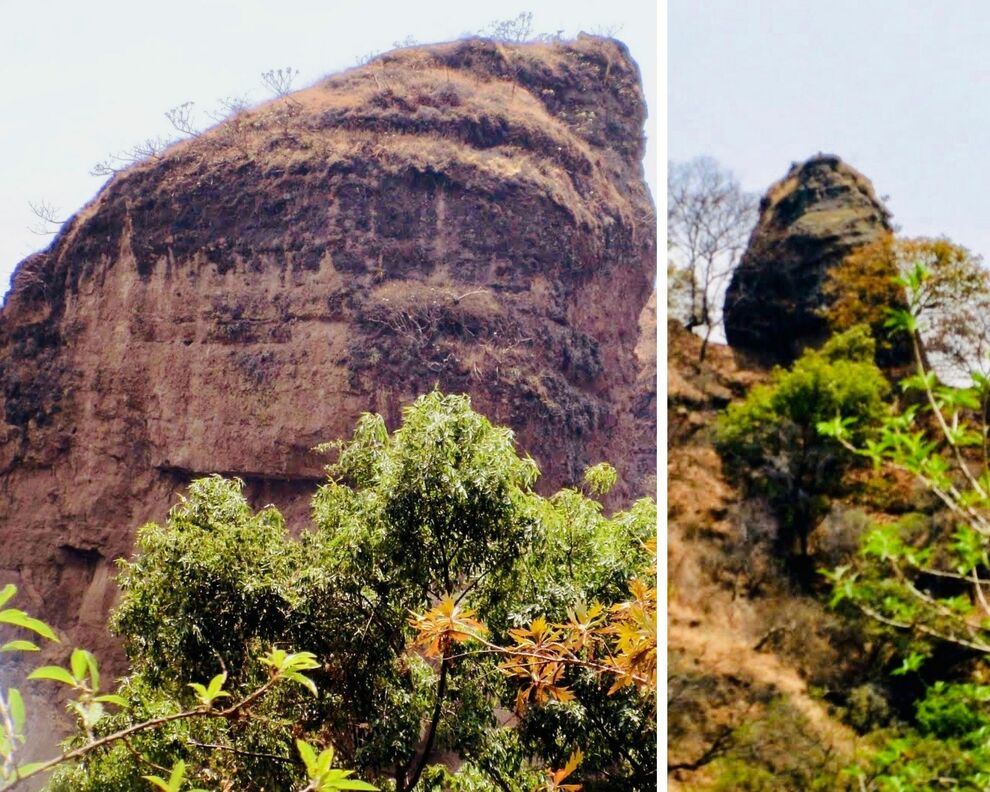 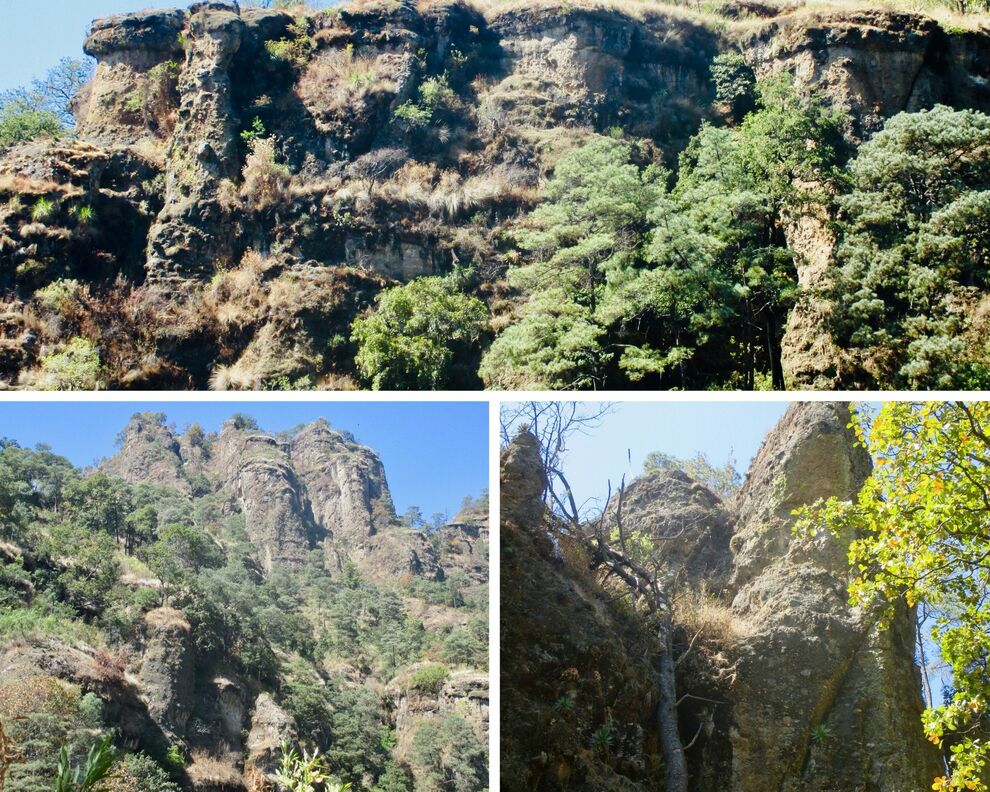 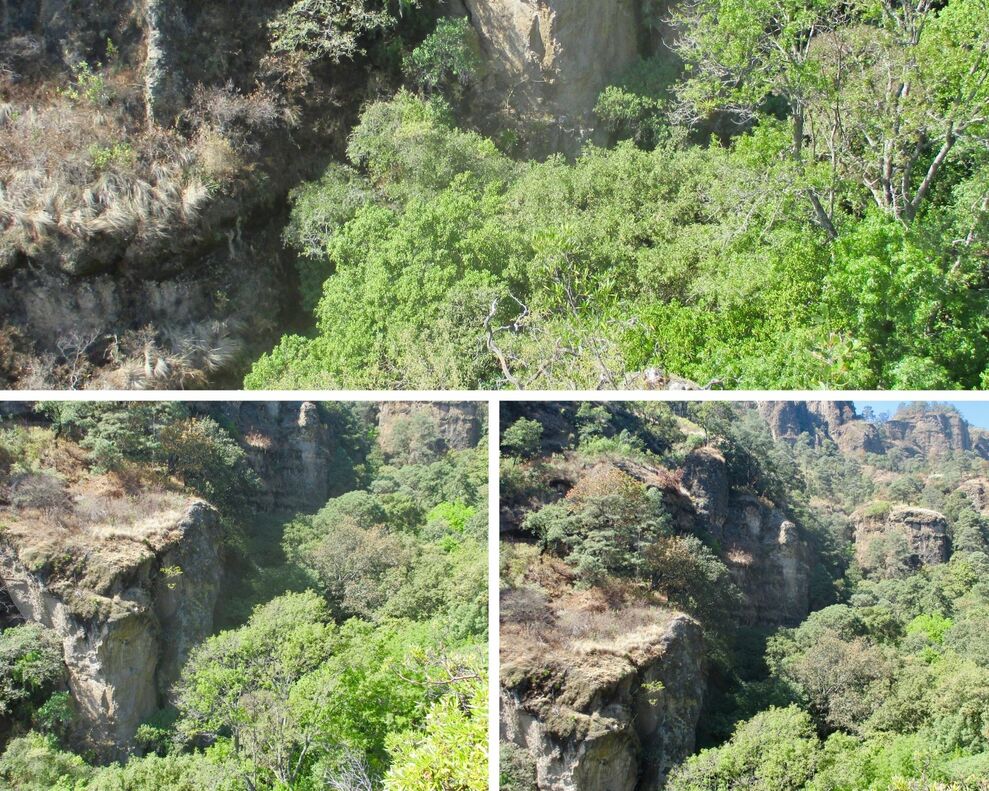 Amatlán, Morelos, Mexico. Views of canyons from a hilltop above them. 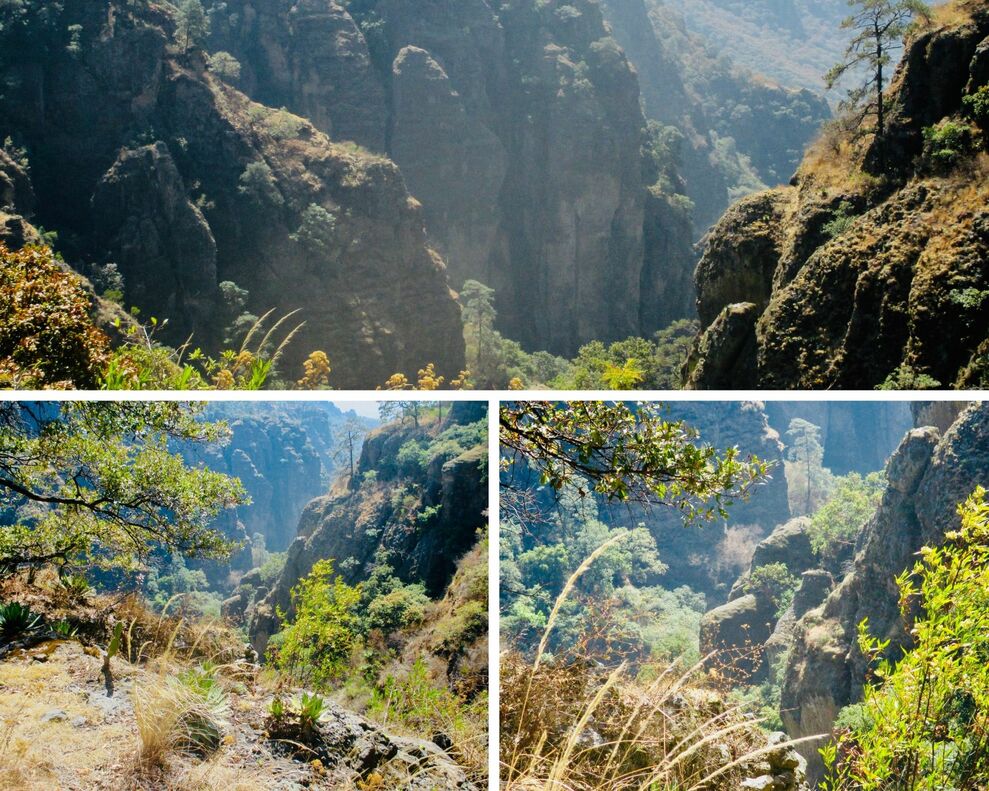 Earlier I mentioned that Amatlán is the birthplace of the god Quetzalcóatl. In a prior article, I outline a hike to La Posa (The Pond) where he was born. Here is a video from that article:

If you scroll down in this article, you'll see photos comparing an herbal clinic and a standard one in Amatlán.

For hikes elsewhere in and near Tepoztlán, see this, this, and this one.

I'm looking for beta readers for comments prior to publication.

This is for the eBook I am generating from this blog, "Letters From Mexico," and from my second memoir, "Better Living In Mexico."

If you can help in this project please let me know by email, here.

I am very grateful for all of you consistent readers.